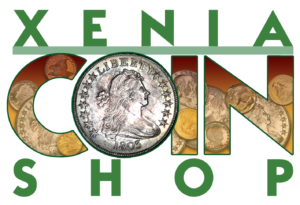 Cull/Worn Condition: A coin with major damage or excessive wear including rim damage, bent coins and polished and cleaned coins.

In an effort to establish consistent and reliable pricing we have assembled the following guide. The prices quoted represent what we can pay for Common Date United States Silver Dollars and PCGS or NGC Silver Dollars in Mint State 63, 64 and 65 grade. Better dates and mint marks will bring a substantial premium. Bring your coins into American Rare Coin or email your high-resolution obverse and reverse images to info@CoinsOnLine.com and one of our numismatic professionals will be happy to examine your coins.

The Morgan Dollar series contains many better date coins and should be reviewed carefully for dates and conditions. Some of the basics to look for when checking for better dates include any coins bearing a “CC” or Carson City mint mark (located on the reverse and below the eagle’s tail) and coins from the years 1892-1895. A full and exhaustive list of better date coins and conditions is too extensive to discuss here.

Be aware that values can vary greatly from coin to coin. Your 1904 and Prior dated Morgan dollars should be evaluated by a numismatic professional to determine the value of better dates or coins in better condition.

The 1921 Morgan dollars were struck in Philadelphia, Denver and San Francisco. If uncirculated, or close to uncirculated, the “D” and “S” mint marked coins may bring a premium. In the grades of XF and lower, all varieties generally trade at the same price level. The coins minted in 1921 are the most common of the Morgan dollars.

Products that We Purchase